１９９９年夏にフジロックフェスティバルに行った時の記録を、２０１６年６月１９日に再掲した記事です。
This is my memories of Fuji Rock Festival in summer of 1999.

Summer of 1999, I enjoyed the great rock festival held in Naeba, Niigata, Japan. It's called "Fuji Rock Festival '99". Actually, this festival started near Mt. Fuji two years ago. But some reasons, held at Tokyo last year and this year is in Naeba. This is the first time for me to join this rock festival.
The festival was for three days long from 30 July to 1 August. I went to the second and third days. When I arrived to Naeba in the late afternoon on 30 July, there was a welcome banner. 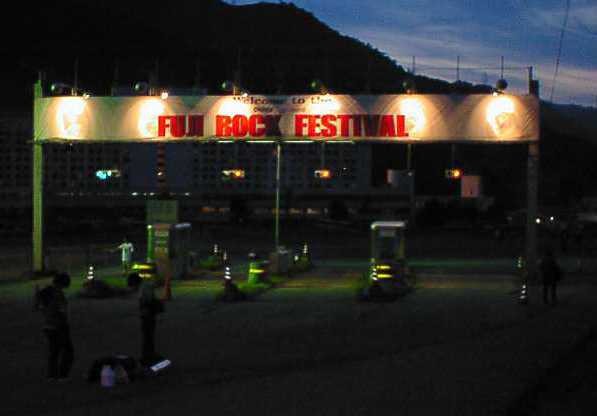 There was a camp site to feel rock all of the day. A camp site was actually a ski site. I built my own tent but I found out I forgot to brought a sleeping bag! The first night was too cold for me. 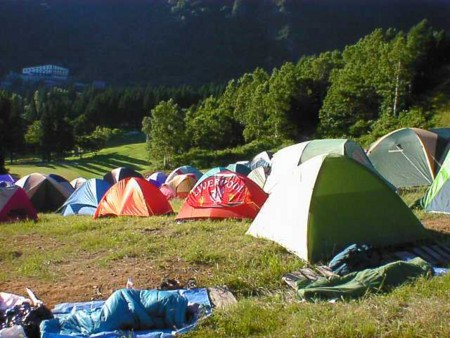 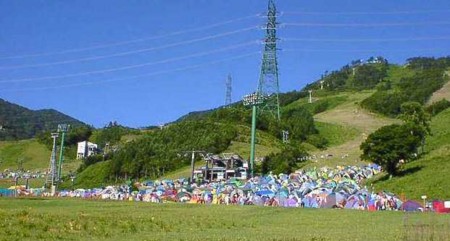 On the second day, this was my first experience to join such a big rock festival. I imagined a rock festival in U.K. which I hope to join. The wheather was fine and Naeba is full of green. The biggest stage is called Green Stage. 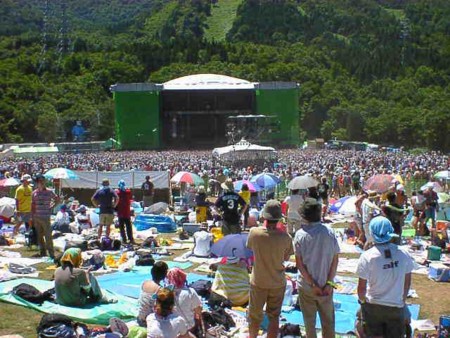 Today's stages I watched were, Ray Davies of the rock legend the Kinks, The Chemical Brothers and Blur. I've been listening the Kinks since when I was 15. But I didn't expect to Ray plays the Kinks' songs cos he was individual this time and with an acoustic guitar. When the stage went on, he started to play the Kinks' song with acoustic and electric guitar. I suddenly remembered the days when I was listening these songs and I could stop crying. This was the best stage for me in the Fuji Rock Festival '99.
The Chemical Brothers and Blur were both most biggest British band in this festival. Many audience listen and dance with thier beats.
Other stage is also inside green. Levi's New Stage for newcomer bands is left and Virgin Tent for dancing till 5 morning is right. 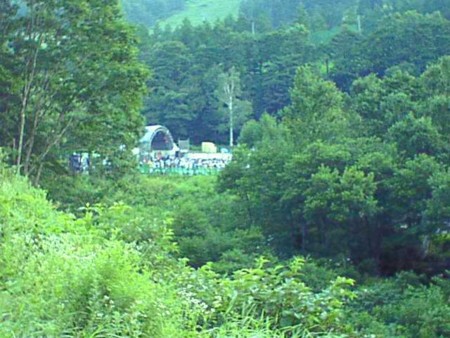 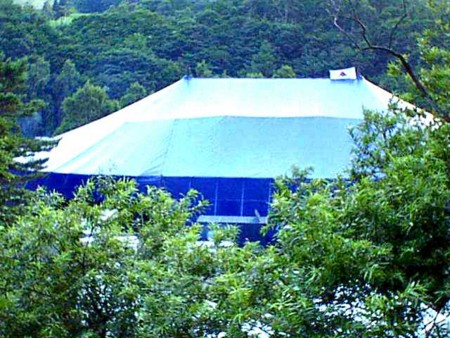 See such a perfect blue sky upon White Stage. There is one more stage called Field of Heaven but I could never been there cos I was busy for watching many bands in Green and White Stage. 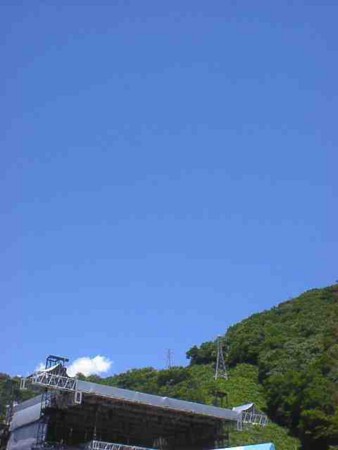 In a interval of live acts, I was reluxed behind a stage. Audience were not permited to use fire to cook to keep out fire in the festival area. But I enjoyed a cooking with hot sun. This is a kind of solar oven made by reflected paper. 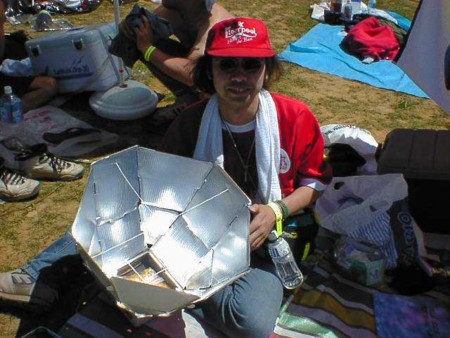 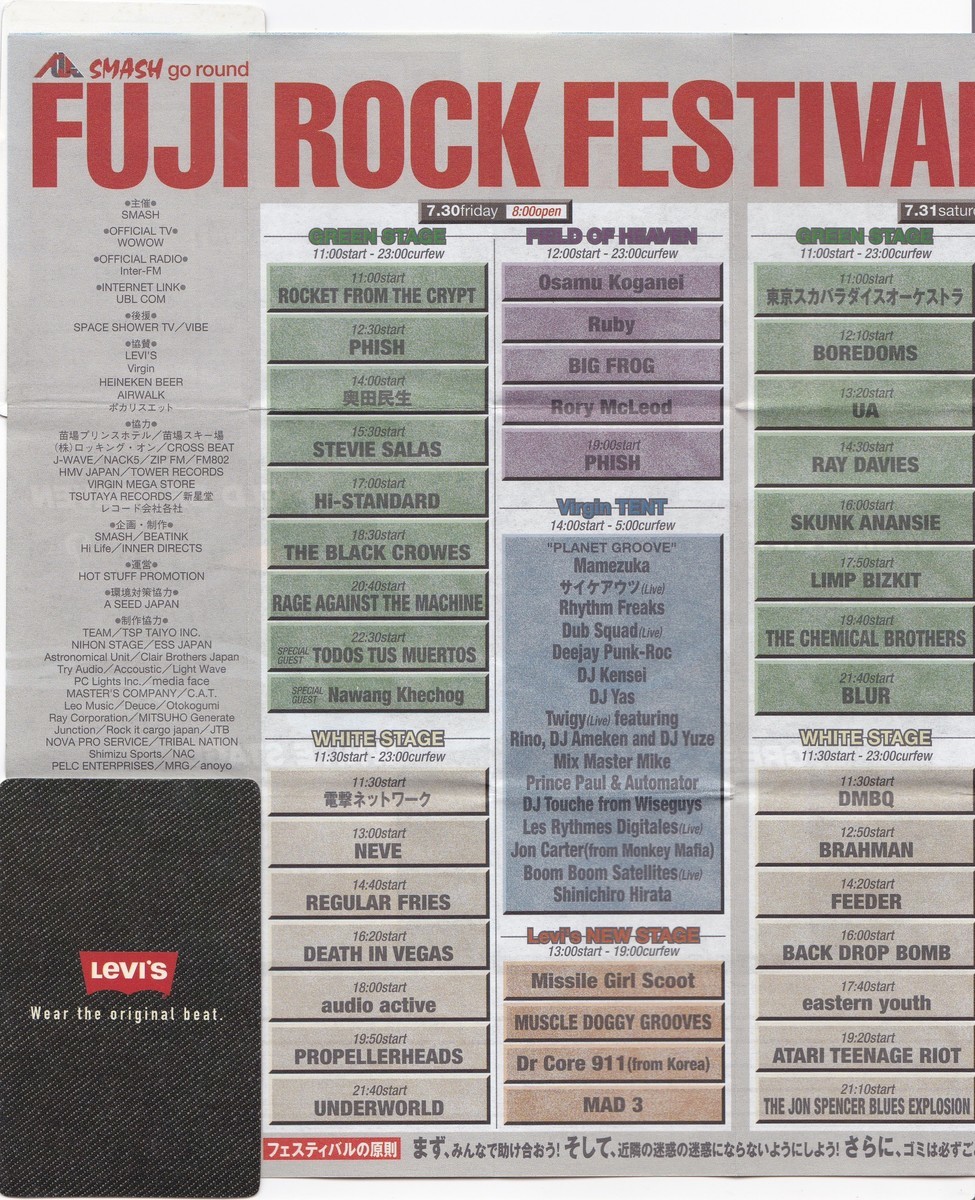 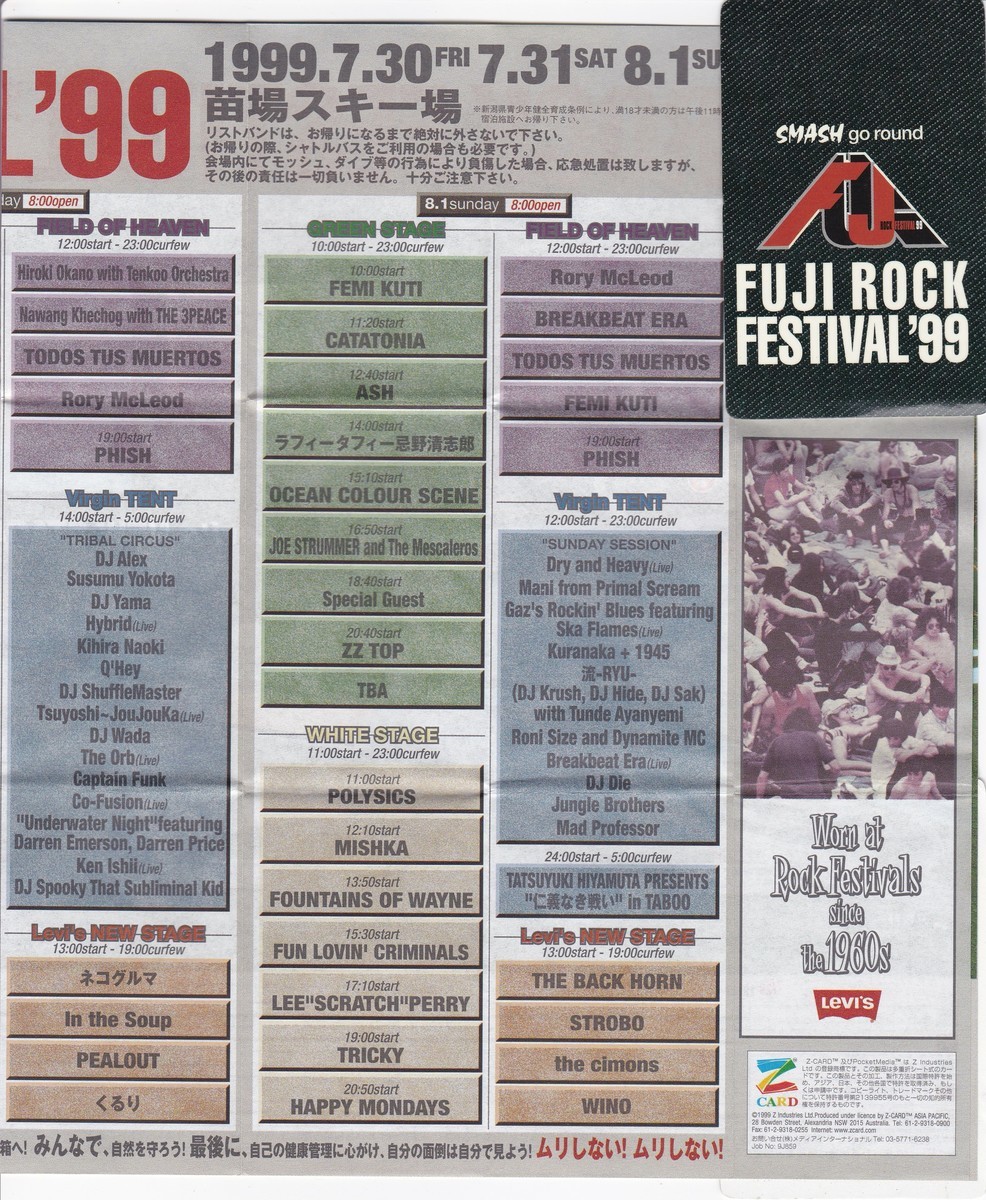 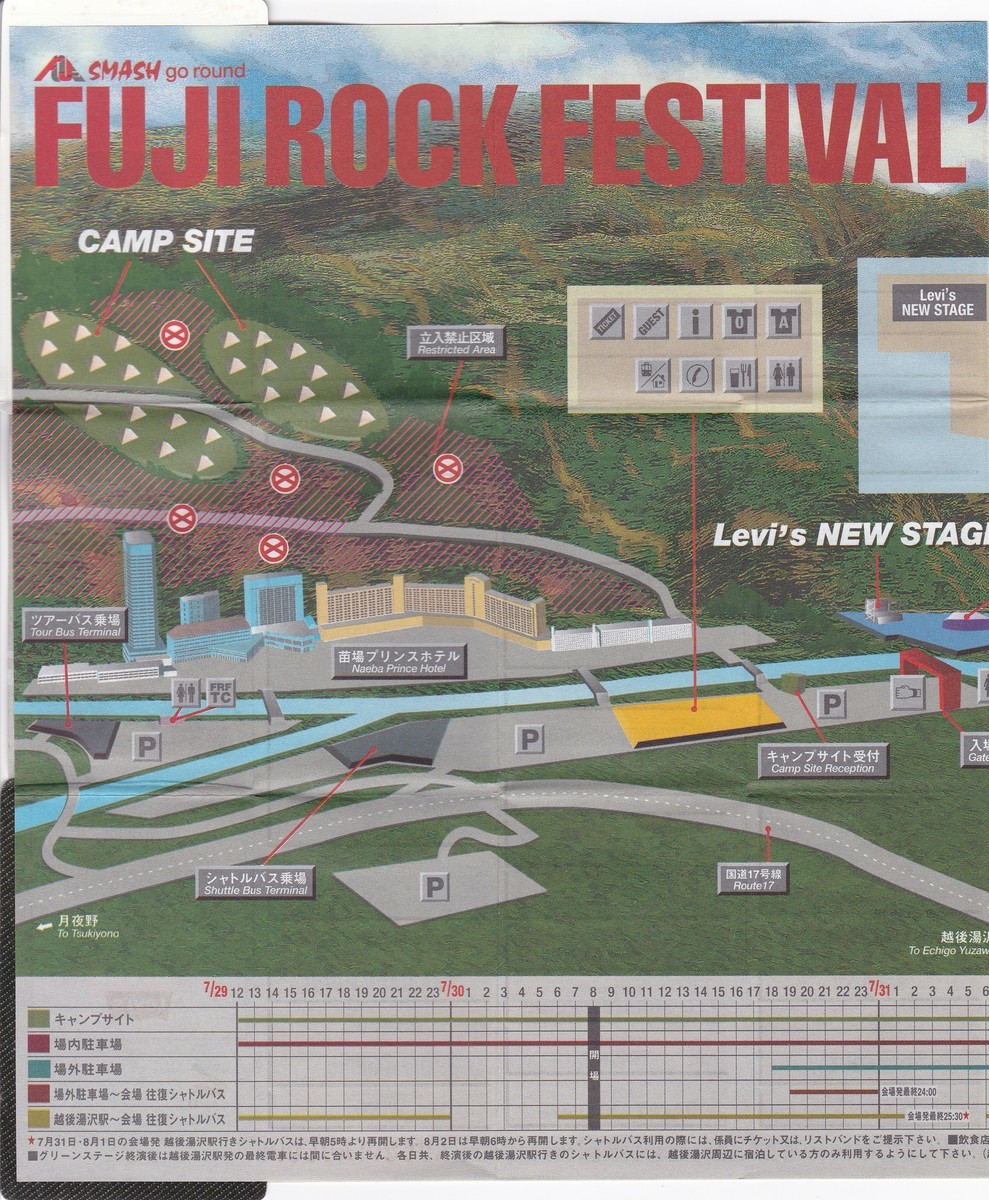 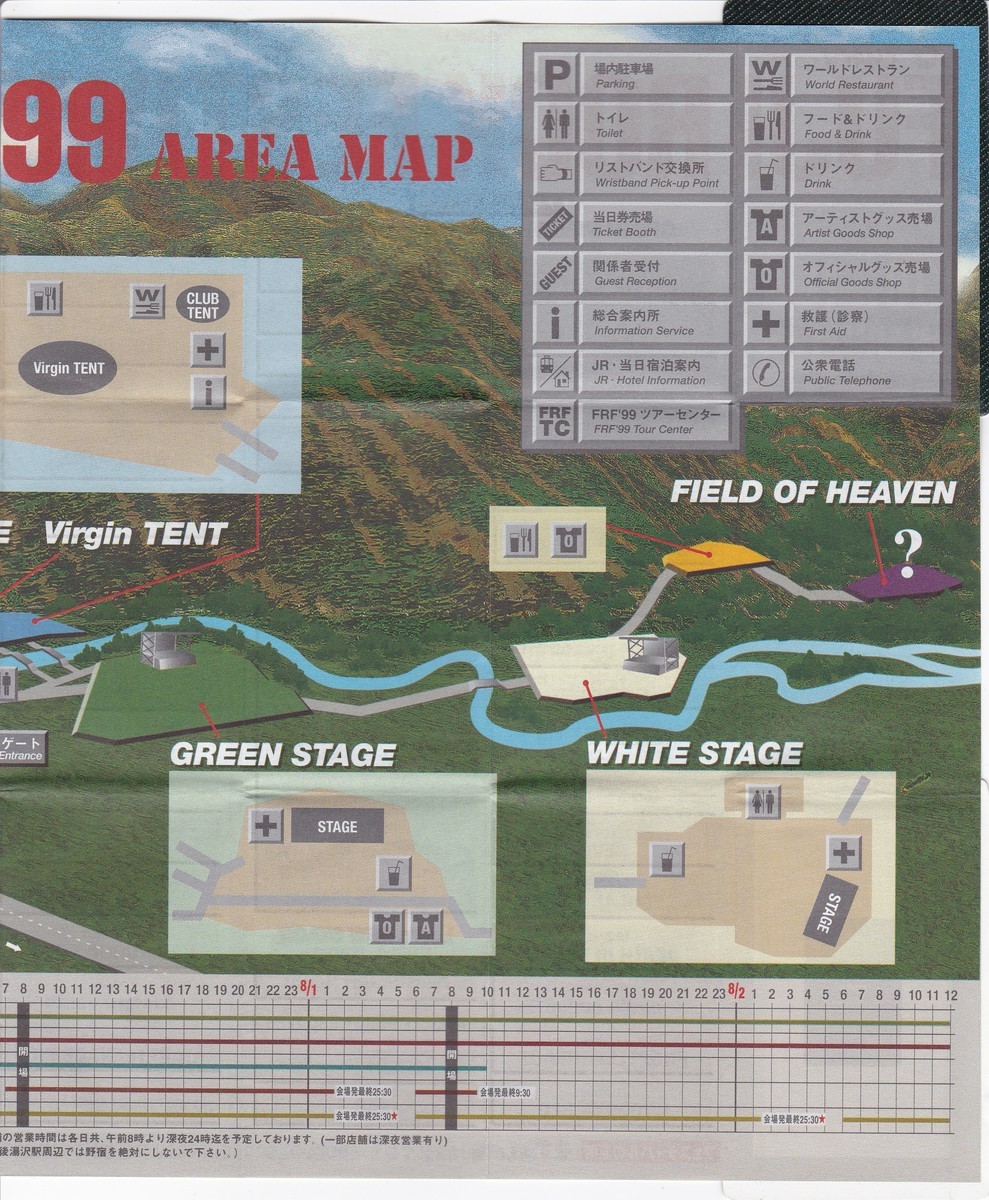 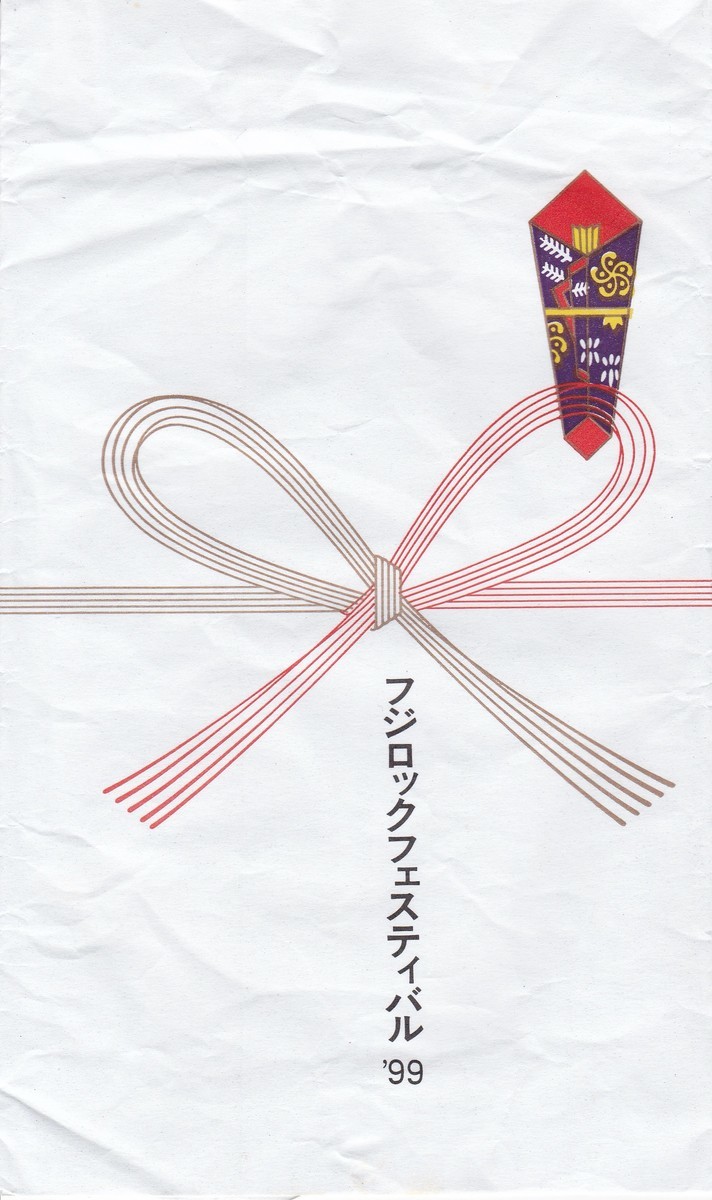