１９９９年夏にフジロックフェスティバルに行った時の記録を、２０１６年６月１９日に再掲した記事です。
This is my memories of Fuji Rock Festival in summer of 1999.
Next day was busy for me to watch many bands, Catatonia, Fountains Of Wayne, Ocean Colour Scene, Bernard Butler, Joe Strummer and the Mescaleros, Happy Mondays and ZZ Top. They all appeared in a same day!!
The wheather was fine too. I waited for Catatonia in the Green stage. 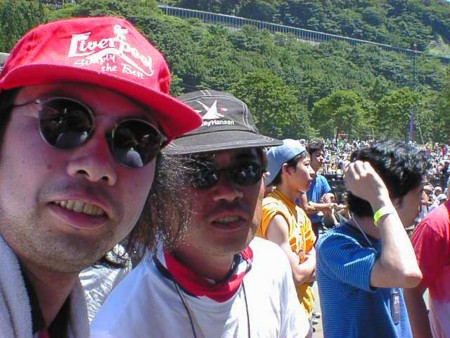 Catatonia's female vocalist Cerys was on a stage with wine bottle. Fountains Of Wayne was with a disposable camera. They friendly asked audience to smile:) Ocean Colour Scene played hard groovin song. Before they played encore song, they introduced they'd play Oasis song. I wondered which song would play. But the song they played was the Beatles' "Day Tripper". I was jumped up and sang a song with them. I missed Ash on the Green stage cos I went to the White stage to watch Fountains Of Wayne.
Bernard Butler was a sudden act instead of Hole which cancelled to come to Japan. I hoped to hear Hole but Bernard was also made a good guitar sound. I think Hole would regret not to play here later. Joe Strummer was from '70s band the Crash. I never heard them but he was one of the surviver of the very first Fuji Rock Festival in 2 years ago which had been attacked by Typhoon. He sang about that experience. 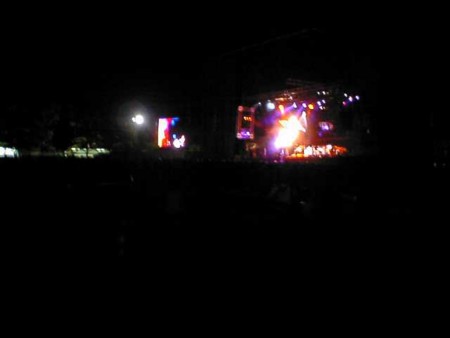 After I heard they played "London Calling", I moved to the White stage for Happy Mondays. There were some people wearing Manchester United shirt in the stage. Oh, Happy Mondays were from Manchester. I hide my Liverpool cap in a bag. Shaun Ryder also wore Man U shirt on the stage. I don't hate Manchester but hope Liverpool bands to come to this festival next year.
After the end of the White stage, I went back to the Green stage. ZZ Top was still playing rock'n roll with two long beard guys. That's almost the end of the festival. This festival was almost perfect for me. Good music, fine wheather, natural wind and many people gethered same place. After the all stage was end, background music for exit were Bob Dylan's "Browin' In The Wind", John Lennon's "Power To The People", "#9 Dream" and so on. These were all of my favourite songs. I felt like crying.
The mid-summer night's dream was over. I hope to come this festival again though not be announced the place for next year.
There are a photos of me in front of the entrance of the festival and view of the Green stage. You will know how natural this stage. 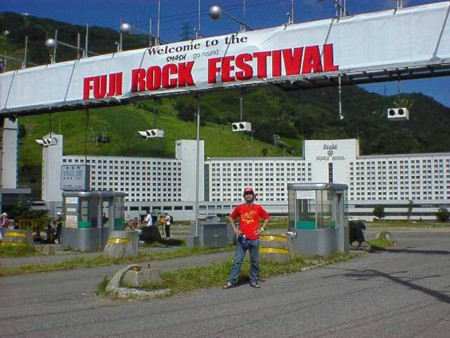 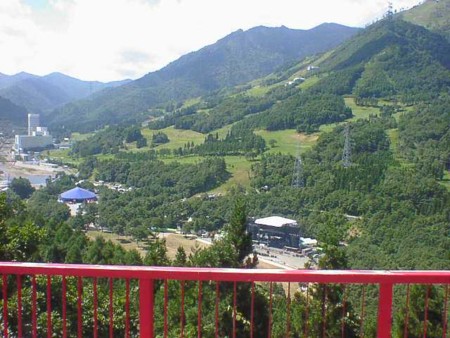 In this festival, the organizer SMASH reported about the festival. I was reported by them when I was breaking off behind the Green stage.
« 北海道１日目 釧路 Fuji Rock Festival '99 »
プロフィール